I take the photos with my Nikon CoolPix point-and-shoot camera on my way home from work — all from the comfort of my MINI Cooper cabin.

Street photography at its wildest and weirdest.

At Scene on Queen, typical photography ‘sins’ like blurriness and bad composition are forgiven in favor of the story behind the photo.

It’s all subjective, but know that in the split second just before I press the shutter, something clicks inside me — moves me to record it.

A strange pattern or reflection; juxtaposition or gentrification.

When the street light turns green, the moment’s gone.

For the full modus operandi and other cool Toronto street pics, 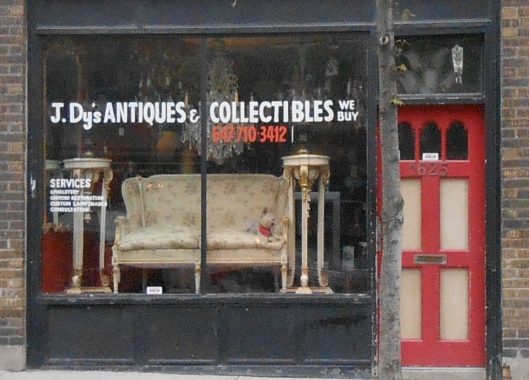 I collect antiques. Why? Because they’re beautiful. — Broderick Crawford

J. Dy’s Antiques & Collectibles — A picture-perfect storefront window arranged “just so.”  I love the symmetry of the sofa flanked by antique stands and the cluttered luxury of a ceiling dripping with over-the-top chandeliers.

The piece de resistance? An unexpected live ‘prop’ — the dog —  his kerchief echoing the pop of color on the front door.

It’s August.  We’re in the middle of the dog days of summer.

In preparation, there are four things I must do.

1) Disguise the fact that I’m just a little bit afraid of dogs. If they stand taller than my knees, I get nervous. But I really LOVE them! Given that dogsledding involves interacting with at least 15 howling, rambunctious mid-size huskies, one might question my motivation in choosing this particular winter activity. (Luckily, I’m capable of holding contradictory truths simultaneously)

2) Persuade my reluctant, winter-hating French Canadian boyfriend (henceforth referred to as Monsieur), who loves dogs and is NOT afraid of them, that we’ll have even MORE fun this year.

3) Locate my thermal underwear. And my balaclava. Plus my Sorrels. They’ve been hibernating.

4) Book our favorite room at Sir Sam’s Inn in the Haliburton Highlands and register for the two-hour Winterdance dogsled tour. (they fill up months in advance)

As future posts will reveal, I am a certified cat person. (yes, another contradiction) And I also have an aversion to winter including all winter sports. (yes, another one)

In fact, prior to the first dogsledding tour, I didn’t even own any casual winter wear. I actually had to buy ski pants for the first time since I was a kid! 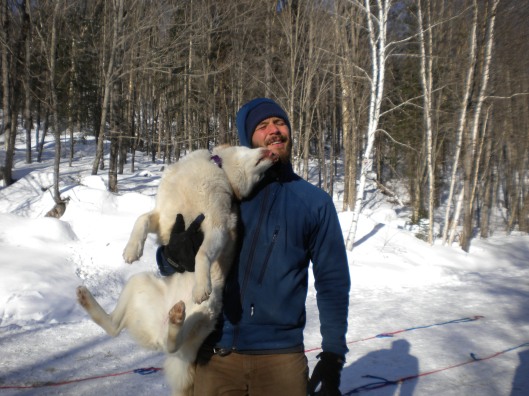 Monsieur and I were becoming entrenched in a sloth-like winter routine. It was high time for us to come alive during this dreaded season before we found ourselves crushed under the weight of stagnation. (a little dramatic, but true nonetheless)

Dogsledding seemed like an antidote that provided adventure, required no special equipment and demanded only average athletic ability. Perfect.

In the photo above, the Winterdance guide scoops up one of the dogs for some love and affection before the run.

These two beauties led our team of three other dogs plus myself and Monsieur on the sled. Dogsledding is a team effort and, as explained by the guide in our inaugural excursion, the person on the back of the sled sometimes acts as the “sixth dog.”

For instance, when trekking uphill, it’s part of the driver’s job to encourage the dogs and guide the sled by pushing off using one leg like you would a (huge) scooter.

To lighten the load, the passenger must vacate the sled and huff and puff their way to the top of the hill on foot.

Thankfully, there is also a slow/stop brake on the back of the sled which comes in handy when you careen– yes, careen — downhill on a narrow trail and the dogs are flying at top speed!!

(As it turns out, screaming for your life is NOT a command).

And no, I DID NOT get a picture. 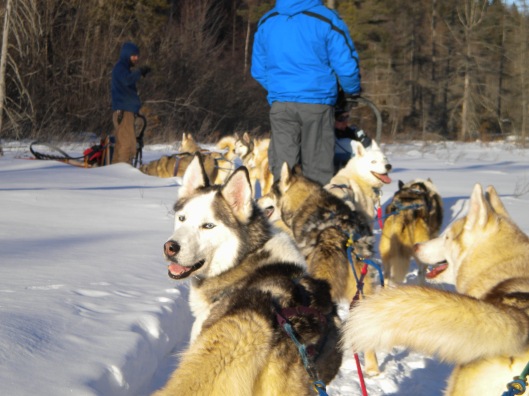 These canines have a ton of energy and love to run. If you waste time standing around admiring the breathtaking scenery they’ll throw you a couple of questioning looks.

Our adorable team! That’s me lounging in the sled. Monsieur is on the back  — catching his breath and gritting his teeth. 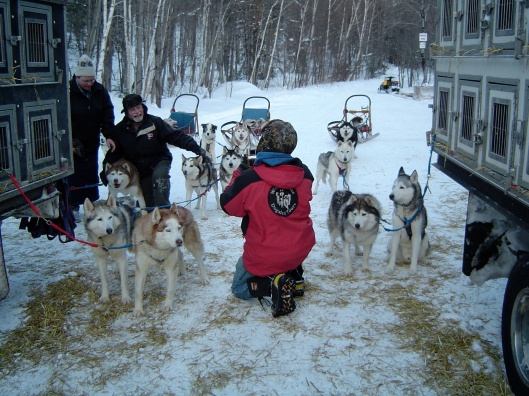 Hank De-Bruin, owner/operator of Winterdance dogsledding tours, and an Iditarod and Yukon Quest competitor, said this of dogsledding: “There’s not a drug in the world that gives you a better high. It’s raw power at its purest.”