It was the best of times………

A pinkish-blue haze — the early morning of December 30, 2012 — on the shore of Lake Ontario just west of Sunnyside Pavillion.

Birds nestle at the water’s edge; an ice-blue tinge casting a quiet spell over the snow and sky. 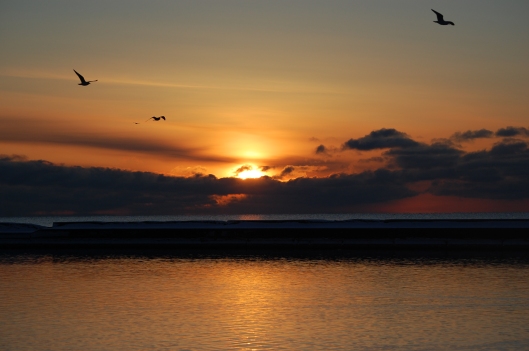 The sun peeks over the horizon, bathing the lake in warm, liquid gold.

Enough poetry. This peaceful scene belies the mayhem that rained down upon this exact spot just 24 hours earlier when….

It was the worst of times….

Hurricane snow…. the early morning of December 29, 2012 — pitch dark on the shore of Lake Ontario just west of Sunnyside Pavillion.

I trudge to the water’s edge; a black-and-white-and-sepia-tone tinge casting a surreal abstract over the snow and sky.

The snow falls furiously, bathing the lake in giant polka dots.  The End.

(Note: Snowstorm photos were taken in near darkness with my 35 mm f/1.8 prime lens).

Upcoming Posts:  An Afternoon With Valentino & Versace in Beverly Hills

6 thoughts on “A Tale of Two Sunrises”